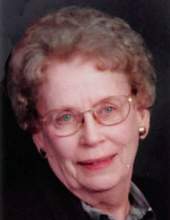 Funeral services will be held 10:30 A.M., Monday, November 16th at Zion Evangelical and Reformed Church in Garner with Rev. Brian Lund officiating. Burial will be in Ell Township Cemetery in Klemme.

Visitation will be held from 4 to 6 P.M., at the Cataldo Funeral Chapel, 160 E. 4th St., in Garner and will continue one hour prior to services at the church.

Memorials may be directed to the Hancock County Historical Society.

Ada Reka Schoenwetter, the daughter of Ben and Grace (Nieman) Blank, was born February 19, 1929 in Hancock County. She attended Erin Township schools and graduated from Kanawha High School in 1947. After high school she attended Iowa State Teacher’s College in Cedar Falls where she received her teaching certificate. Ada then taught in the country schools in Belmond Township for four years. On August 28, 1951, she was married to Homer Schoenwetter at the Kanawha Christian Reformed Church. They lived on a farm west of Klemme until 1988 when they moved into Garner. Ada did volunteer work in Garner, worked as a hospice volunteer for fifteen years and was involved with the adult reading tutor program at NIACC. In 1994, she was awarded the Governor’s Volunteer Award by Governor Terry Branstad. She loved being with family, friends, traveling, crocheting, knitting, quilting at church and all kinds of embroidery work.