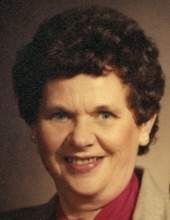 In lieu of flowers, memorials may be directed to the St. John Lutheran Church In Woden.

Adeila was born on February 18, 1928, in Sebeka, MN. She was the daughter of Glen Dean Anderson and Selma Norene (Holland) of Sebeka, MN.

She attended Township 253 grade school in Ottertail County, Minnesota. She graduated from Sebeka, MN high school in 1945. Adeila worked at the local creamery in Sebeka making butter. Shortly after graduating she moved to Forest City, Iowa and worked at the Central Cafe and then worked as a clerk for Lynn’s Department store. While there, she met Merle Bilyeu and they were married on July 5, 1947. Adeila and Merle first lived on a farm by Thompson, Iowa and then moved to Buffalo Center, Iowa where they started farming in 1949. In 1965, they purchased the Bilyeu family farm near Woden and later purchased another farm nearby.

Adeila was an active member of Grant Lutheran Church in rural Woden for over 55 years and was a member of the Rebeka Circle. She was also active in different circles, the Grant birthday club, the girls 4-H and Brownies. For 50 years she was part of the American Legion Auxiliary in Woden and VFW in Buffalo Center.

She loved to sew, garden, bake and take care of her cats. She enjoyed traveling with Merle after they retired from farming. They went to Air Force reunions for 15 years and to visit their children and grandchildren throughout the U.S.

Adeila will be remembered for unconditional love of people, her children, grandchildren and great grandchildren.

She was preceded in death by her husband of 59 years, Merle Wilbur Bilyeu and her siblings and their spouses, Geraldine Paurus (Arnold), Mavis Hansen (Emil), and Roger Anderson (Marlene)