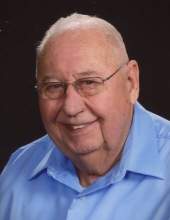 Adolph Anthony Reineke, the son of Anton and Loretta (Olberding) Reineke was born January 6, 1936 in Randolph, Nebraska. He attended Randolph schools until the 11th grade, he moved to Forest City in 1952 and graduated in 1954. He entered into the U.S. Army on December 14, 1954 and was honorably discharged on December of 1956. He was married to Bonnye Newell from Garner, IA on April 7, 1958, to this union five children were born.

Ade enjoyed farming, collecting Allis Chalmers tractors and traveling with his wife Bonnye. Ade lived for his grandchildren and great-grandchildren. He will be dearly missed by all who knew and loved him.

He was a member of St. James Catholic Church where he served as usher and also on the church board for many years.

He was preceded in death by his parents; infant brother; sisters, Rosemary and Helen Reineke and a brother, Edward Reineke; infant daughter, Charlotte Marie and three grandchildren.
To order memorial trees or send flowers to the family in memory of Adolph Anthony Reineke, please visit our flower store.