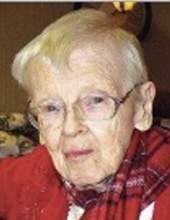 Funeral services will be held 10:30 A.M., Monday, February 6th at the United Methodist Church in Britt with Rev. Robert Dodge officiating. Cremation will follow the service with burial at a later date in Pleasant View Cemetery near Thornton.

Visitation will be held one hour prior to services at the church. Cataldo Funeral Home of Britt is in charge of arrangements.

Memorials may be directed to the Champion Scholarship Fund at West Hancock High School.

Alice Lorene Champion, the daughter of Alfred and Laura (Blewett) Ingebretson, was born February 21, 1913 on a farm outside of Thornton. In high school, she was a very enterprising young lady. She made her own flax seed hair setting solution and gave finger waves to some of the town ladies for 25 cents. She graduated from Thornton High School in 1931. Alice was married to Alfred Champion at her parent’s home on July 10, 1937. Alfred was the manager of the Thornton Creamery, where she helped him with bookwork. They moved to Britt in 1946 and Alice and Alfred joined Ed Boothroyd in buying the Community Food Market, where she wore many hats. When the butcher went on vacation, Alice ran the butcher shop. When the baker left, she ran the bakery making all the pies and cakes. In 1958, the store was sold to Super Value. At this time Alice was employed in several Britt businesses, such as the nursery, the jewelry store, the men’s clothing store, and as a volunteer at the library. Alice was a member of the Britt United Methodist Church, Methodist Women’s Society, Methodist Sunday school, Hancock County Historical Society, Hancock County Memorial Hospital Auxiliary, the Rebekah’s and the Methodist quilting group. Alice loved to work with her flowers and garden and had a big raspberry patch. Quilting was one of her hobbies and she worked with the Methodist women doing custom quilting. Alice also enjoyed playing cards, early morning walks, swimming, and shuffle board in Texas. Alice and Alfred left a lifetime legacy to education by donating over $ 180,000.00 in college scholarships to graduates of West Hancock.

Living family members include her brother, John Ingebretson of Thornton; and sister, Bethel Enabnit of Swaledale.

She was preceded in death by her parents; husband, Alfred, Sept. 17, 1999; and sisters, Helen Carstens, Miriam Mares and Dorothy Conrin.
To order memorial trees or send flowers to the family in memory of Alice Champion, please visit our flower store.