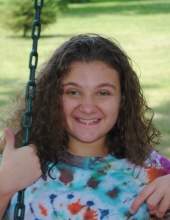 FOREST CITY - Alli Marie Seglem, 19, of Opportunity Village in Clear Lake gained her angel wings on Saturday, May 28, 2016 on her 19th birthday. Alli was a resident of Twilight and most recently Moon Valley, where she passed away peacefully in her sleep.

Memorial services will be held at 10:30 A.M., Wednesday, June 1, 2016 at the United Methodist Church in Forest City with the Rev. Charles Layton officiating.

Alli Marie Seglem, was born May 28, 1997 in Mason City, IA, the daughter of John and Tracie (Conrad) Seglem. She graduated from Forest City Community Schools with the class of 2015. She was baptized at the Winnebago Lutheran Church and confirmed at the United Methodist Church in Forest City.

Alli had an infectious personality and smile that would light up any room. She had a great love for Scooby Doo, Curious George, swimming, swinging, and eating her favorite foods. Even though Alli was non-verbal, she could always communicate with those around her by simply showing off her smile, giving you the “Alli Look” with those big brown eyes, and of course the great big hugs and slobbery wet kisses that she was always willing to share. Alli’s way of telling others how much she loved them. She was constantly on the watch for those who were not paying attention. When your back was turned Alli was very sneaky, your meal and drink would be Alli’s meal and drink, in the blink of an eye.

A special thank you to the staff at Opportunity Village for taking such great care of Alli and loving her like their own. We never felt sad to say goodbye when we would visit her as she was excited to go back to her new home. Also, to her wonderful teachers Sandy Wagner and Kris Linder for nurturing her throughout her school years.

In lieu of flowers memorials may be directed to the Alli Marie Seglem memorial fund in care of the family.

Fly high Baby Girl, we love you and miss you dearly. Alli’s last greatest gift was being an organ donor.
To order memorial trees or send flowers to the family in memory of Alli Marie Seglem, please visit our flower store.