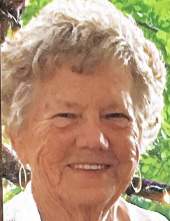 Funeral services will be held 1:30 p.m., Friday, July 9, 2021 at Peace Reformed Church south of Garner with Rev. Mark Larson officiating.  Burial will be in the church cemetery.

Visitation will be held from 5:00 to 7:00 p.m., Thursday at Cataldo Funeral Chapel, 160 E. 4th St., Garner and will resume one hour prior to services at the church.

Memorials are preferred to the Alzheimer’s Association.

The service will be livestreamed on the Cataldo Funeral Home Facebook page.

Alyce Ann Katter, was born on a farm near Ellsworth, Iowa on November 10, 1935 to Arlen and Carrie (Challe) Dahl of Ellsworth, Iowa.  She was baptized and confirmed at Trinity Lutheran Church in Ellsworth.  She was a 4-H member for many years. Alyce Ann attended country school and graduated from South Hamilton High School in 1954. She then attended Waldorf College in Forest City, Iowa and nursing school in Minneapolis, MN and Marshalltown, IA.On January 23, 1959 she was united in marriage to William Katter of Garner, Iowa.  They lived all of their married life on a farm south of Garner. Alyce was a 4-H leader for many years, belonged to Beta Sigma Phi sorority for 50 + years holding several offices, was a member of Peace Reformed church where she taught Sunday School and was involved in various capacities of Mission Society.  They were blessed with 4 children, 9 grandchildren and 7 great grandchildren.  She loved to travel with her husband which included trips to Europe, Hawaii, Alaska, Niagara Falls, the Canadian Rockies and many trips to Branson and Florida.

She was preceded in death by her husband William of 62 years who passed away on February 2, 2021, her parents, brothers Eugene (died in infancy) and Arlen Jr (killed in the Korean War), her sister Kathleen (Kay) and her husband Archie.
To order memorial trees or send flowers to the family in memory of Alyce A. Katter, please visit our flower store.