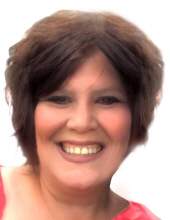 Visitation will be held from 4 to 7 P.M., Thursday at St. Boniface Catholic Church with a Scriptural wake service at 3:30 P.M. followed by a rosary.

Memorials may be directed to the Andrea Young Memorial Fund.

Andrea Michele Young, the daughter of Fredric and Gena (Gorman) Greiman, was born September 29, 1971 in Britt. She attended and graduated from Garner-Hayfield High School in 1990 and continued her education receiving her RN degree from Ellsworth Community College. On August 24, 2004 she was married to Todd Young at Palmer, Alaska. They lived on a farm near Garner where they raised their family. Andrea worked at IMT Transport in Garner at the time she passed.

Best said from a Facebook post, "The entire community of Garner will be affected by the loss of this amazing human being. She was definitely one that represented what an Iowa farm girl looks like and even more so how an Iowa farm girl acts...she was such a kind-hearted person, friend, mother, wife, daughter, sister, aunt and so much more. She was always there to help others, knew how to make you laugh and was never afraid to get her hands dirty doing hard work". Andrea enjoyed spending time with her children and her family, reading, and also playing and spending time with her pets. She enjoyed her career as a nurse and especially caring for her patients. She lived for the Hancock County Fair where growing up she showed 4-H and FFA and continued the fair tradition with her children, nieces and nephews. Riding horses with her daughter, Karlee, and vacationing with her family and friends in Bena, MN every year was important to her. Andrea enjoyed sitting, talking and watching movies with her son and buddy, Kaden. She was also known as a professional house chore dodger. Many other things she enjoyed were visiting her sister Brook and niece and nephew in Austin, TX, babysitting her nieces and nephews, supporting all of her nieces and nephews in sporting events and activities. She loved going to concerts and just hanging out and visiting. As someone said simply...Andrea always had a beautiful smile, a contagious laugh, and a forgiving soul.

Psalms 147:3 He heals the brokenhearted and binds up their wounds.

She was preceded in death by her paternal grandfather, Wayne Greiman; maternal grandparents, Walter and Phylida Gorman; and father-in-law, Don Young.
To order memorial trees or send flowers to the family in memory of Andrea M. Young, please visit our flower store.