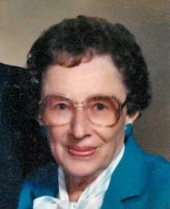 Visitation will be held from 4 to 6 P.M., Tuesday at the Cataldo Funeral Chapel, 160 E. 4th St., in Garner and will continue one hour prior to services at the church.

In lieu of flowers, memorials may be made to St. Paul Lutheran Church Choir.

Anna Ottilie Radloff, the daughter of Gustav and Louise (Dorow) Pueggel, was born March 27, 1915 on a farm north of Clear Lake. She was baptized and confirmed at St. John's Lutheran Church northeast of Garner. She graduated from Ventura High School and Thompson School of Cosmetology in Des Moines. She owned and operated a beauty shop in Belmond until her marriage to Raymond Radloff at St. John's Lutheran Church on May 29, 1938. They made their home in Garner. Ray and Anna built and operated the R-Motel in Garner for a number years. Anna enjoyed her family and friends, singing in the church choir, golfing, bowling, reading, vacationing and traveling with Ray. Most of all, she was an avid bridge player who enjoyed getting together with friends for a challenging afternoon or evening of bridge.

She was a member of St. Paul Lutheran Church, LWML, Ruth Circle and sang in the church choir for many years.

She was preceded in death by her husband, Ray, in July of 2000; her parents; and two sisters, Esther Pueggel and Agnes Hollatz.

To order memorial trees or send flowers to the family in memory of Anna Ottilie Radloff, please visit our flower store.