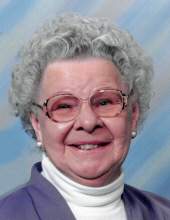 Visitation will be held from 5 to 7 P.M., Wednesday, January 29th at the Cataldo Funeral Chapel, 160 E. 4th St., Garner and will resume one hour prior to services at the church.

Arlene Edith Peterson, the daughter of Carl and Josephine (Anderson) Johnson, was born October 21, 1922 on a farm near Buffalo Center. Arlene was baptized at Linden Church near Thompson and confirmed at Bethlehem Lutheran Church in Buffalo Center. She attended country school near her home and graduated from Buffalo Center High School in May of 1939 as the first in her family of nine girls and two boys. She met her future husband, Allen Peterson, at a dance at the Surf Ballroom in Clear Lake. On March 21, 1943 they were married at the Lutheran parsonage in Clear Lake. To this union two children were born, Barbara and Kenneth. They farmed and raised their family west of Ventura. In 1972, they moved into a house they built in Ventura. She enjoyed playing cards, bingo and in her younger years, dancing with Allen at the Surf Ballroom. Family was very important to Arlene.

She was a member of St. Paul Lutheran Church in Garner and past member of Redeemer Lutheran in Ventura and Ellington Prairie Church near Miller.