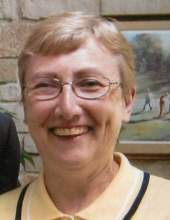 Barbara Ellen Palmer, 64, of Forest City, died Saturday, September 10, 2016 at her home surrounded by her family after a valiant fight with kidney cancer.

Funeral services will be held at 11:00 A.M. on Wednesday, September 14, 2016 at Calvary Baptist Church in Forest City with the Pastor Doug Farrell officiating. Burial will be in Oakland Cemetery.

Visitation will be held on Wednesday, one hour prior to the services at the church.

Memorials may be directed to the Calvary Baptist Church in Forest City.

Barbara Ellen Palmer was born on July 17, 1952 at the Forest City Municipal Hospital just 7 days after her future husband’s birth in the same hospital.
She was the daughter of Dean and Shirley Hodson of rural Forest City, she joined her older brother, Steven to complete their family.

Dean passed away on September 24, 1954. Her mother was later remarried to William Everding of Titonka, IA on March 25, 1956 in Lake Mills at Asbury Methodist Church. Barb attended and graduated from Titonka Consolidated School in 1970. She was a member of the National Honor Society and excelled in track during her junior and senior high school years. Her team went to state several times and Barb held some school records in track.

Following graduation she took secretarial training at Spencer School of Business, graduating in May of 1971. She accepted a billing clerk position with Winnebago Cooperative Telephone Association in Thompson that summer. In 1975, the RTA relocated to the new headquarters in Lake Mills.

On July 14, 1973 Barb was united in marriage to Timothy Palmer at Calvary Baptist Church in Forest City. They established their home on the Palmer family farm. In 1980, she left the workplace to begin a family; they were blessed with two sons, Mark, born April 11, 1980 and Jeffrey, born on March 23, 1984. Barb provided caregiving for Jeffrey’s diabetes after his diagnosis on September of 1987.

She was a faithful member of her church and on March 30, 1986 she recommitted her life to Christ as her savior. Barb loyally served over the years as a Deaconess, Awana Leader, Sunday school teacher, Senior High Camp Counselor, church treasurer and she was involved in Mission Circle.

Barb had a beautiful voice. She enjoyed singing in the choir for 15 years and doing special music.

Barb had a great sense of humor as demonstrated in the “Skits” that she and her best friend, Mary Lou Johnson performed.
She was a prolific reader and loved cooking for family and friends, enjoyed doing Sudok and crossword puzzles to stimulate her mind.
She loved spending time traveling with family and friends on vacations, mission trips and weekend getaways.

She was preceded in death by her father and three sets of grandparents; Arnolds, Everdings and Hodsons.
To order memorial trees or send flowers to the family in memory of Barbara Ellen Palmer, please visit our flower store.