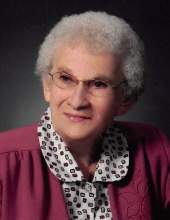 Funeral services will be held 10:30 A.M., Monday, December 7th at the United Methodist Church in Garner with Rev. Paul Evans officiating. Burial will be at Concord Township Cemetery in Garner.

Visitation will be held from 2 to 4 P.M., Sunday at the Cataldo Funeral Chapel, 160 E. 4th St., in Garner and will continue one hour prior to services at the church.

Beryl Arlene Abele, the daughter of Joseph and Mamie (Crouch) Hyler, was born March 29, 1922 in Swea City. She graduated from Swea City High School and Waldorf College in Forest City where she received her teaching certificate. Beryl taught in the rural schools of Hancock County and Garner Community Schools before moving to Ames where she worked as a secretary in a school. On May 28, 1950 Beryl was united in marriage to Loren E. Abele in Ames. The couple lived on the family farm northwest of Garner all of their married life. After Loren passed away, she moved to Prairie View Apartments in Garner. Beryl enjoyed baking, gardening, reading to her grandkids, and playing the piano and organ.

She was a member of United Methodist Church, UMW, Farm Bureau and was a 4-H leader.

She was preceded in death by her parents; and husband, Loren November 11, 2004.
To order memorial trees or send flowers to the family in memory of Beryl A. Abele, please visit our flower store.