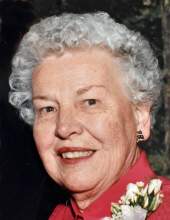 Inurnment will take place at a later date at the Iowa Veterans Cemetery in Adel, Iowa.

Memorials may be sent in Betty’s honor to MercyOne North Iowa Hospice.

The descendant of French Huguenots who fled their homeland due to religious persecution, Betty was born on February 8, 1926 in a farmhouse near Paton, Iowa to William Benjamin Tourte and Hinda Leona (Krafft) Tourte. She was baptized at the Little Brown Church in Nashua, Iowa. She actively helped on the family farm and played basketball in her spare time. At the age of 18, Betty decided to help the World War II effort, enlisting in the U.S. Cadet Nurse Corps and training at Iowa Lutheran Hospital in Des Moines. After the war, she worked as a nurse in Denver, Colorado. It was here that she met her future husband and fellow Iowan, Melvin “Pete” Petersen, at a party. They smoked half a cigar together and the rest was history. They married at the Evangelical United Brethren Church in Paton on July 6, 1948 and soon after relocated back to Iowa where they had three children: Becky, Tom (whom she named after one of her favorite patients) and Geni. Pete and Betty ran Petersen’s Jewelry Store in Garner for more than 50 years. Betty briefly returned to nursing in 1966 after the infamous Belmond tornado. The family loved to travel, including many cross-country road trips when the kids were young. Betty and Pete continued to explore far and wide during their golden years, both within and outside the U.S., including trips to Venezuela to see Becky, South Africa to see Tom (and to bottle feed baby lions!), and New Mexico to see Geni. Betty spent her nineties touring the countryside by hot air balloon and open cockpit airplane as well as watching basketball.

She was preceded in death by her husband; her parents; and her older brother, Bob Tourte.

The family would like to thank the wonderful staff of Cardinal Grove Assisted Living in Garner, the medical professionals at Mercy Hospital in Mason City, and the kind and caring staff at Hospice of North Iowa.
To send flowers to the family in memory of Betty A. Petersen, please visit our flower store.