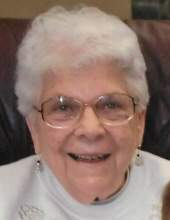 Funeral services will be held 10:30 A.M., Monday, April 4, 2016 at United Methodist Church in Forest City with the Rev. Charles Layton officiating. Burial will be at Madison Township Cemetery in Forest City.

Visitation will be held 2 to 4 P.M., Sunday at the Cataldo Schott Funeral Home in Forest City and will continue one hour prior to the service at the church

Memorials may be directed to United Methodist Church in Forest City.

She was a member of the United Methodist Church, UMW and the Forest City American Legion Auxiliary.

She was preceded in death by her parents; husband, Loren; and two brothers, Don and Bud Faber.
To order memorial trees or send flowers to the family in memory of Betty Jo Ann Indvik, please visit our flower store.