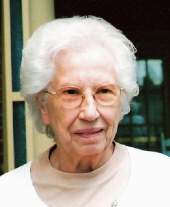 Memorial services will be held 1:30 P.M., Saturday, April 4th at the United Methodist Church in Britt with Rev. Robert Dodge officiating. Inurnment will be in the Corwith Cemetery.

Memorials may be directed to the Armstrong House in Britt.

Beulah Bell Green, the seventh of eight children of Daniel and Anna (Kanitz) Green, was born August 9, 1913, on the family farm near Corwith. She attended the rural schools of Hancock County. She lived in Britt where she was employed as a nurse for Dr. Camp for many years. Beulah later moved to Arvada, CO to be near her son, Dr. James "Gary" Green. She enjoyed spending time with her family and quilting.

She was a member of the United Methodist Church in Britt, UMW, Rebekah Lodge and the Hancock County Historical Society.

She was preceded in death by her parents; two sisters, Bertha Davis and Ethel Halligan; and five brothers, Edward, Carl, Elbert, Harold and William Green.

To order memorial trees or send flowers to the family in memory of Beulah Green, please visit our flower store.