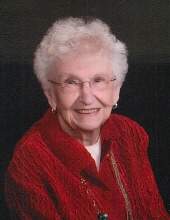 In lieu of flowers, memorials may be directed to Immanuel Lutheran Church or Hospice of North Iowa.

Bonnie was born May 3, 1925, to Clinton and Ada (Peterson) Stokesbary in rural Klemme, Iowa. She grew up with four brothers and four sisters in the Klemme, Garner and Mason City communities. They were a very close family, gathering for holidays, birthdays and other special occasions. Bonnie and her sisters Maxine, Ruth and Phyllis were especially close.

Bonnie graduated from Lake Mills Community School in 1943. While a student at Lake Mills, she also received teachers training. She taught for three years in country schools near Garner. Bonnie enjoyed sharing stories with her grandchildren of teaching country school, comparing it to what they were experiencing.

Elmer and Bonnie moved to their farm home west of Lake Mills in 1948. Bonnie was a homemaker who enjoyed sewing, quilting, crafting and crocheting. They raised four children on the farm: Michael, Steven, Brian and Ann. Elmer passed away April 21, 1980.

While employed as a dormitory head resident at Waldorf College, Forest City, Bonnie met John T. Osnes. They married on July 28, 1984 at Immanuel Lutheran Church, Forest City, Iowa. They made their home in Forest City and were active members of Immanuel Lutheran and the Sons of Norway. Bonnie was involved with church circle, quilters and the Prayer Shawl ministry. John passed away September 19, 2011.

Bonnie enjoyed living in her home in Forest City until the effects of Lewy body dementia started to control her life. She lived for a short time at Forest Plaza Assisted Living and then moved to Westview Care Center in Britt. In January of 2019 Bonnie entered the Lake Mills Care Center.

She was preceded in death by her parents, son, Michael (1969), first husband, Elmer Abele and second husband, John Osnes. Siblings Lyle, Mildred, Glenn, Marvin and Bert and twin great-grandsons also preceded her in death.
To order memorial trees or send flowers to the family in memory of Bonnie Jean Abele Osnes, please visit our flower store.