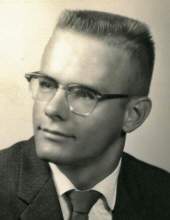 Funeral services will be 10:30 a.m. Thursday, May 26, at Trinity Lutheran Church, Knierim, with Pastor Chadric Dietrich officiating. Burial will be in Greenfield Township Cemetery, Knierim.

Visitation will be 4 to 7 p.m. Wednesday at the Palmer & Swank Funeral Home, Rockwell City.

Bruce John Strutzenberg was born March 13, 1941 at Fort Dodge. He graduated from Cedar Valley High School, with the Class of 1959. Bruce received his Bachelor’s Degree from University of Northern Iowa in Cedar Falls and his Master’s Degree from Buena Vista College in Storm Lake. In 1961, he was united in marriage to Marilyn Zeckser. Bruce taught school in many communities including Pomeroy, Scranton, Garner-Hayfield, and Eagle Grove. In 1981, they made their home on a farm south of Knierim, where Bruce taught school at Prairie Valley Schools for 23 years until his retirement.

Bruce was an active member of Trinity Lutheran Church.

He was preceded in death by his parents, John and Ruth Wilson Strutzenberg; and sister Linda Tuvell.
To order memorial trees or send flowers to the family in memory of Bruce J. Strutzenberg, please visit our flower store.