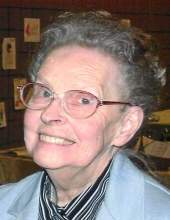 C. Elaine Gapp, age 91, died peacefully on Friday, January 22, 2016, at the Good Samaritan Center, and is now rejoicing in heaven in the presence of her Lord and Savior.

Interment will be held in Trinity Lutheran Church Cemetery in Spring Grove, MN.

In lieu of flowers memorials may be directed to Good Samaritan Society, First Baptist Church and Hospice of North Iowa.

Elaine Gapp was born on December 12, 1924 in Janesville, WI, the daughter of Charles and Cleva (Koon) Rathjen. Elaine had many interests in her life including her love of music. She majored in music at St. Paul Bible College and was an accomplished pianist, organist, and also excelled at playing the vibraharp. She used her musical talent to teach and serve others. Elaine loved God, the Bible, and Church. Her faith was a vital part of her life.

Elaine and her husband, Eugene, pastored churches in many locations including churches in Burns, MN, Wild Rose, ND, Savage, MT, Aberdeen, SD, St. James, MN, Spirit Lake, IA and finally in Spring Grove, MN. She loved her family and friends and enjoyed taking vacations and trips to see them. After Eugene passed away (1983), Elaine eventually settled in Forest City, IA where she has been a member of the First Baptist Church for many years.