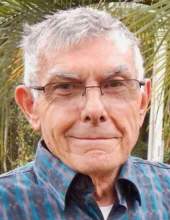 A funeral service will be held 10:00 A.M., Wednesday, January 27, 2021 at St. Patrick Catholic Church in Britt with Rev. Fr. Andrew Marr officiating. Burial will be at Bingham Township Cemetery near Woden. The service will be livestreamed on the Cataldo Funeral Home Facebook page beginning at 9:55 A.M.

A visitation will be held from 4 to 6 P.M., Tuesday, January 26, 2021 at Cataldo Funeral Chapel, 310 Main St., Woden and will resume one hour prior to services at the church. Masks are required and social distancing guidelines will be followed.

Charles Edward Rudisill, the son of John and Theresa (Weishaar) Rudisill, was born September 24, 1942 in Buffalo Center. He graduated from Woden Crystal Lake High School in 1960. After high school he moved to California for a short time before returning to Woden where he owned and operated Chuck’s DX. On December 27, 1969 he married Donna Krieger at the Catholic Church in Woden. They made their home in Woden where they raised their family. Chuck also drove semi for several years and was a mail carrier at the Woden Post Office retiring in 2010. His buddies affectionately referred to him as Cliff. He enjoyed golfing, attending his grandchildren’s activities, coffeeing uptown, bowling, feeding the birds and squirrels on his deck and going to the casinos. Chuck never passed up an opportunity to play the slot machines.

He was a member of St. Patrick’s Catholic Church in Britt and served as a fireman on the Woden Fire Department for many years.