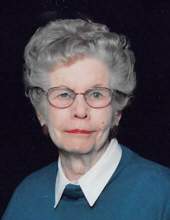 Memorial services will be held at 1:30 P.M., Monday, July 16th at Immanuel Lutheran Church in Forest City with Rev. Rod Hopp officiating. Inurnment will be in Madison Township Cemetery.

In lieu of flowers, memorials may be directed to Good Samaritan Society, Forest City.

Cleone S. Reisetter, the daughter of Alfred and Emma (Pederson) Peterson, was born November 13, 1922, in Newton Township near Leland. She received her education in the Forest City schools graduating with the class of 1940. On February 28, 1953, she was united in marriage to Donald W. Reisetter. They made their home in Forest City, and after Don’s death in 2008, she lived in her own home until after her 95th birthday. She held a few part-time jobs in the Forest City area over the years, but primarily was a homemaker. Cleone enjoyed baking, knitting, was an avid reader, and loved crossword puzzles. Cleone and Don played bridge regularly with a couples’ bridge club and after Don’s death, she continued to play with a ladies’ bridge club well into her 80’s. She also enjoyed spending time outside, working in her flower beds and feeding the birds. In the summer, Cleone cheered for the St. Louis Cardinals and in the winter, she enjoyed watching basketball.

Cleone was an active member of Immanuel Lutheran Church for nearly 65 years and was a member of the Forest City VFW Auxiliary. She was also involved with Girl Scouts, Cub Scouts, and other numerous organizations in the area.

Cleone dearly loved her family. She was fortunate to have one of her grandchildren grow up and live nearby. Cleone and Melissa enjoyed every minute together; whether it be art projects, shopping, or long talks; they understood each other and will have an everlasting bond.

She was thoughtful of others, creative, open-minded and generous.

She was preceded in death by her parents; husband, Donald; sister, Elaine Thompson; brother, Duane Peterson; as well as many brothers-in-law and sisters-in-law.
To order memorial trees or send flowers to the family in memory of Cleone Reisetter, please visit our flower store.