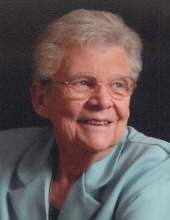 A visitation will be held one hour prior to the services at the church on Tuesday.

Interment will be held in Madison Township Cemetery in Forest City.

Memorials may be directed to the United Methodist Church in Forest City.

Peg enjoyed driving and traveling, her and Harry traveled to Hawaii, Texas, California, Alaska, Canada, Arizona, Yellowstone National Park and Branson many times. She enjoyed the times she spent with her extended family and will be dearly missed by all who knew and loved her.

Peg is survived by her nieces and nephews and special friend, Jody Smith.

She was preceded in death by her parents and husband, Harry in 2011 and brothers, Delbert “Bud” and Don Faber and sister, Betty Indvik.
To order memorial trees or send flowers to the family in memory of Constance "Peg" E. Tjelta, please visit our flower store.