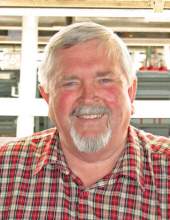 A visitation will be held from 2 to 4 P.M., Sunday, November 6th at the United Presbyterian Church in Garner followed by a funeral service at 4 P.M. with Rev. Justin Asche officiating. A graveside service will be held 10 A.M., Monday, November 7th at Concord Township Cemetery in Garner. The family requests casual dress at the graveside.

Dale Eugene Pringnitz, the son of Lloyd and Mildred (Hammond) Pringnitz, was born December 4, 1947 in Belmond. He grew up on a farm near Goodell and in 1954 moved with his family to a farm one mile west of Garner. Dale graduated from Garner-Hayfield High School in 1966. After graduation, he farmed, custom sprayed and raised livestock south of Garner. He later did over the road trucking and helped his son, Jesse, on the farm in the spring and fall. He enjoyed truck pulling and attending his grandchildren’s activities.

He was a member of the Hancock County Pork Producers, was a past member of the Garner Jaycees and served on the Northrup King Advisory Board.

He was preceded in death by his parents.
To order memorial trees or send flowers to the family in memory of Dale E. Pringnitz, please visit our flower store.