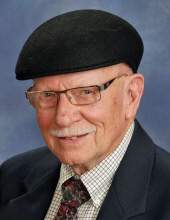 A Celebration of Life Service for Darwin was held Monday, February 21, 2022 in Sun City, AZ. Interment will be at Ell Township Cemetery in Klemme on Monday, July 11th at 11:00 a.m. with a graveside service for family and friends. Following the service, a luncheon will be served at Immanuel Reformed United Church of Christ in Klemme. Cataldo Funeral Home is in charge of arrangements.

Darwin was born June 11, 1931, near Klemme, IA to Cornelius and Marie (Thiemann) Wille. Darwin graduated from Klemme High School in 1948 and served in the United States Army from 1952-1954 in Colorado where he first fell in love with the mountains. He was united in marriage to Opal Weinheimer on June 8, 1958, in Fontanelle, Iowa, and they lived near Klemme, Iowa on the Wille Homestead. After his time in the Army, Darwin spent his career on the farm, growing corn, soybeans and raising pigs. Darwin and Opal raised three children, Todd, Lisa and Sara. He was a wonderful father in many ways. He taught them the value of hard work and supported them in all of their sports and other activities throughout the years and continued to do the same with his grandchildren. Darwin enjoyed serving on various boards in the community and at their church, Immanuel Reformed United Church of Christ in Klemme. He loved to travel and take his family on camping trips, visiting many states across the country. He was always planning the next adventure.

Darwin and Opal moved to CO from Iowa in 1986, due to his health. He loved the Colorado mountains. After moving there, he began the hobby of woodworking and tole painting, creating many pieces for home and holiday decor. They continued to travel with their Pleasureway RV and covered many miles, often with a caravan, making lasting friendships nearly everywhere they went. Darwin had interstitial lung disease, and eventually had to have full time oxygen because of Colorado’s altitude. In 2013 they moved to Sun City, AZ where he no longer needed the oxygen machine. He again was active in their community, serving on their church board and as president of their HOA. He loved Sun City!

He was preceded in death by his parents; an infant daughter, Dona; and six siblings, five of whom reached the age of 90+.

To order memorial trees or send flowers to the family in memory of Darwin Wille, please visit our flower store.