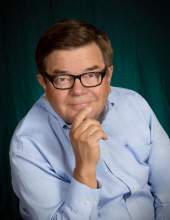 In lieu of flowers, memorials are preferred in memory of Dave to Central Gardens of North Iowa, Mayo Clinic or Young America’s Foundation.

David Allen Backus, the son of Norman Lloyd and Mildred Adela (Billington) Backus, was born August 8, 1947 in Thorp, Wisconsin. He lived in three small towns in Wisconsin for short periods before moving to Valparaiso, Indiana, where he graduated from high school in 1965. After high school, he attended college at Butler University in Indianapolis for a brief time. He then moved to Chicago and attended Loyola University graduating with a Business degree in accounting. Dave began working at Chemetron Corporation in Chicago where he met his wife, Carol. On July 25, 1975, they were married at the Chicago Temple. Their one child, Sarah, was born to the couple in 1985. They lived in Chicago until 1989 when Dave was recruited to work as the controller for Titan Wheel International in Quincy, IL. In 1992 Dave joined the The Knapheide Manufacturing Company as Vice President of Finance. Dave was instrumental in their rebuilding after the flood of 1993. In 2005, he was hired by Stellar Industries Inc. in Garner, IA as Chief Financial Officer. He continued as CFO until his retirement in the fall of 2017. In April of 2017, he received a kidney from a fellow Stellar co-worker, Travis Glidden, with heartfelt gratitude. In their retirement, Dave and Carol bought a home in Glendale, AZ, to be near their daughter who works as a physical therapist at a local hospital. He also operated his own financial consulting business, DAB Consulting, which he continued up until this past November. Dave loved gardening, the Green Bay Packers, the Chicago Cubs, and playing cards, especially cribbage. Dave also enjoyed investing, outdoors, having ice cream with loved ones, and very large bon fires. Dave could always strike up a good conversation, and his renowned laugh brought joy to everyone.

He was preceded in death by his parents; brother, Paul Backus; and a nephew, Joshua Campbell.
To order memorial trees or send flowers to the family in memory of David A. Backus, please visit our flower store.