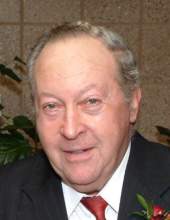 A private family funeral mass will be held 1:00 P.M., Friday, January 8, 2021 at St. Patrick’s Catholic Church in Britt with Rev. Fr. Joseph Sevcik officiating. Burial will follow at St. Benedict Cemetery with military rites by the Britt Veterans Ceremonial Unit. The service will be livestreamed on the Cataldo Funeral Home Facebook page beginning at 12:50 P.M. Cataldo Funeral Home in Britt is in charge of arrangements.

A celebration of life service will be held at a later date.


David Louis Bernhard, son of Maurice and Ella (Elsbecker) Bernhard, was born Sept. 4, 1929 in Bancroft, IA. He grew up on the family farm west of town and graduated from St. John the Baptist Catholic High School in 1947. In his youth, he enjoyed playing baseball and was active in 4-H, which is how he met his future wife, Darlene Kohlhaas.

Dave and Darlene married on Sept. 12, 1951 in St. Joseph Catholic Church of Bode, just before he left to serve in the Army from 1951-1953. He was wounded in combat during the Korean Conflict and was awarded the Purple Heart. His active duty was completed at the Army base near Colorado Springs.

Following the service, Dave and Darlene returned to Iowa and farmed on two different farms near St. Joe, where they began raising their 5 children. In 1963, they purchased a farm by St. Benedict, where they lived for 51 years.

Dave had a passion for farming, it was “in his blood”. Over his long career he expanded the farm operation; growing corn, soybeans and hay, and also raising hogs, sheep, feeder cattle and performance cattle. After partnering with two of his sons for a number of years, Dave retired in 2015, and he and Darlene moved to a senior living community in Britt.

As a long-time member of the St. Benedict Church, Dave was active in maintaining the Church property; crossing the road with his tractor to plow snow or clean up storm damage. He was also a 4-H leader for many years and served on the Kossuth County Fair Board. Dave was an active member and president of the Iowa Beef Improvement Association.

Hunting was a lifelong interest that Dave shared with his father, brothers, sons and nephews. He also enjoyed fishing trips and was an avid Minnesota Twins fan. At family gatherings, he liked to play games and engage in a challenging discussion. The grandchildren were always excited when he let them drive the tractor or took them fishing or target shooting.

He was preceded in death by his son, Daniel Bernhard; his parents; his mother and father-in-law, Connie and Susie Kohlhaas; a son-in-law, Randy Mattson; brothers, Paul, Phil, Bill and Mark Bernhard and brother-in-law, Art Kohlhaas; as well as four sisters-in-law, two nieces and two nephews.