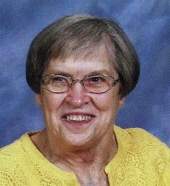 Funeral services will be held 10:30 A.M., Saturday, January 12th at Faith Lutheran Church in Miller with Rose Visser, lay pastor, officiating. Burial will be in Ellington Prairie Cemetery near Miller.

Visitation will be held from 4 to 7 P.M., Friday at the Cataldo Funeral Chapel, 160 E. 4th St., in Garner and will continue one hour prior to services at the church.

In lieu of flowers, memorials may be directed to Hospice of North Iowa or the Good Samaritan Center in Forest City.

Deloris "Dee" Faye (Andreasen) Larson was born on October 6, 1932 in Audubon, Iowa. She graduated from Audubon High School and then attended secretarial school in Omaha before moving to Mason City where she met and married Dick Larson. Dick and Dee had 5 children in 7 years and farmed north of Ventura. Later they managed the Forest City Country Club and then purchased the Bungalow Motor Lodge. Dee then moved to Mason City where she graduated from NIACC and worked at Walmart for over 10 years before retiring. Dee was known as a wonderful cook and many benefited from her talents. She enjoyed spending time with her grandchildren and always offered a listening ear to anyone in need. She will be missed by her family and friends and remembered for her engaging smile and twinkle in her eye.

She was a member of Ellington Prairie-Faith Lutheran Church in Miller and was active in a variety of clubs and organizations.

She is survived by her children, Pat Goerner and her husband, John, of Liberty Hill, TX, Betty Jo Larson and her husband, Tim Gustafson, of Apple Valley, MN and their children Jenna and Ingrid, Sally Larson of Forest City and her son, Spenser, Chuck Larson of Clear Lake and Bob Larson and his wife, Renee, of Naperville, IL and their children, Dani, Brooke and Abby; and two brothers, Lyndyn Andreasen and his wife, Lynn, of Prosser, WA and Gerald Andreasen and his wife, Velma, of West Des Moines.

She was preceded in death by her parents, Emil and Hildur (Carlson) Andreasen; her sister, Delia Sturgeon; and brother, Gene Andreasen.

To order memorial trees or send flowers to the family in memory of Deloris Faye Larson, please visit our flower store.