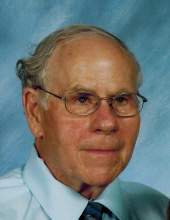 Funeral services will be held 11 A.M., Saturday, October 22nd at Bethany Lutheran Church in Thompson with Rev. Judy Wozniak officiating. Burial will be at Rose Hill Cemetery in Thompson with military rites.

Visitation will be held one hour prior to services at the church on Saturday. Cataldo Schott Funeral Home in Forest City is in charge of arrangements.

In lieu of flowers, memorials to donor’s choice.

Donald Hilton Branstad, the son of Philip A.G. and Lydia (Seikmeier) Branstad, was born April 1, 1927 in Forest City. He attended country schools and graduated from Thompson High School in 1945. Don then went into the U.S. Army Signal Corp serving most of his time in the Philippines teaching radio school. Upon his honorable discharge he attended Iowa State University graduating in electrical engineering. Don worked at Collins Radio in Cedar Rapids. In 1953, he moved to Minneapolis to work at Honeywell and later at FMC. He then took a two-year business course at the University of Minnesota. On May 18, 1968 he married Verneil Anderson. During part of his retirement days he worked with children building robots and electric cars. He was a man of strong faith. Don was very quiet, very organized, very kind and thoughtful and one who never complained.

Don is survived by his wife, Verneil of Minneaplis, MN; brother, Glenn Branstad; sister-in-law, Grace Branstad; brother-in-law, Francis Burnham; and many other relatives and friends.

He was preceded in death by his parents; brothers, Paul and Cliff Branstad; and sisters, Doris Lehman, Lorraine Branstad and Julie Burnham.
To send flowers to the family in memory of Donald H. Branstad, please visit our flower store.