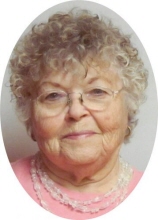 Her body was cremated and there will be no visitation.

Memorial Service will be conducted at 10:30 AM on Monday, December 10, 2012 at Immanuel Lutheran Church in Forest City with Pastor Rod Hopp officiating. Inurnment will be held at a later date at Madison Township Cemetery in Forest City.


Donna Irene Nerem Miller was born near East Chain, MN. on March 13, 1929 to Irvin J. and Cleo Irene (Larson) Classon. The family moved to a farm near Fenton, IA, and Donna grew up enjoying farm life and playing with her many cousins. She was baptized and confirmed in the Lutheran church. Donna graduated from Seneca High School and attended Waldorf College, where she met Erwin S. Nerem. They were married August 8, 1949 at Blakjer Lutheran Church in Seneca and settled on the Nerem family farm at Forest City. To this union two children were born, Larry and Joleene.

Donna taught Sunday School and Bible School classes at Immanuel Lutheran while her children were growing up. She was a staunch advocate of citizens with mental disabilities, serving on committees at Regional, State and National levels. Donna enjoyed being with people and worked many years as a home health aide. She was an avid bowler, earning her first trophy in 1962 and continued bowling into her 80's. She participated in many State and National tournaments.
Erwin passed away August 9, 2001. Two years later, Donna met and married David C. Miller of Renwick, IA. They enjoyed two years together, traveling and visiting family until David's death August 9, 2005.

To order memorial trees or send flowers to the family in memory of Donna Nerem Miller, please visit our flower store.