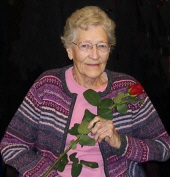 Memorial services will be held 11 A.M., Saturday, Dec. 5th at the Evangelical Free Church in Clear Lake with Revs. Dan Jordan and David Wiersbe officiating. A private burial will be held prior to services at Evergreen Cemetery in Britt.

Visitation will be held from 4 to 7 P.M., Friday at the Cataldo Funeral Chapel, 160 E. 4th St. in Garner and will continue one hour prior to services at the church.

Dorothea Christina Jensen Weiland Erickson, the daughter of Jens and Camilla Christensen Jensen, was born April 7, 1918 in Britt. She graduated from Britt High School in 1936 and from Britt Junior College with a commercial degree. She was employed at the C.P. Lewis department and grocery store until her marriage. On March 8, 1940 she was united in marriage to Louis “Bud” Weiland at the Upper Flat Evangelical Free Church, north of Britt. They lived and farmed for 3 years ½ mile south of Britt before moving to a farm 2 miles east of Garner, where they raised their family. Following Bud’s death on May 18, 1976, Dorothea moved to Clear Lake in 1979, and married Glenn Erickson on April 11, 1993. Glenn died October 4, 2002, and Dorothea remained at her residence in Clear Lake until shortly before her death. Dorothea greatly enjoyed her family, in addition to her hobbies of baking, cooking, gardening and sewing. She also had a great love for serving her Lord.

She was an active life-long member of the Evangelical Free Churches at Upper Flat, Britt, Garner and Clear Lake. Dorothea was a member of the Women’s W.M.S., a Sunday school teacher, a Bible school teacher, and a Bible study member and leader. She was well-known for her cooking skills which included coordinating, cooking and serving for many church activities. Dorothea was active in the Garner area Homemakers Club, the Ventura Garden Club, and as a 4-H leader.

She was preceded in death by her parents, Camilla and Jens Jensen; her first husband, Louis Weiland; her second husband, Glenn Erickson; a brother, Nels Jensen; and a sister, Bertha Jensen Foster.
To order memorial trees or send flowers to the family in memory of Dorothea C. Weiland Erickson, please visit our flower store.