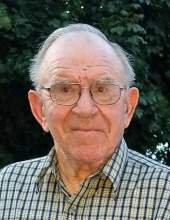 Due to state and federal guidance on gatherings due to the COVID-19 pandemic, a private family funeral mass will be held at St. Boniface Catholic Church in Garner with Fr. Paul Lippstock officiating. The service will be live streamed on the Cataldo Funeral Home Facebook page at 11:00 A.M., Saturday, April 18, 2020. Burial will be at St. Boniface Cemetery with military rites by the Klemme Veterans Ceremonial Unit.

Memorials may be directed to the Elmer Buckley Memorial Fund.

Elmer Vincent Buckley, the son of Raymond and Meta (Klinge) Buckley, was born March 21, 1926 on a farm near Britt. He attended Liberty No. 5 country school and graduated from Klemme High School in 1943. Elmer served his country in the Pacific Theatre during WW II in the U.S. Army Air Force. Following his honorable discharge in November of 1946, he returned home to help on the farm. On August 10, 1955, he married Marion Brozik at St. Boniface Catholic Church in Garner. They made their home on a century farm southwest of Garner where they raised their family and operated a grain and livestock business. In his retirement, Elmer continued to help on the farm. He enjoyed his family, teasing his grandchildren as “they needed a lot of fixing”, going for coffee and driving his pickup around the countryside with his canine companions.

He was a lifetime member of St. Boniface Catholic Church and belonged to the Klemme American Legion and Farm Bureau. Elmer was proud to have participated in the Winnebago County Honor Flight to Washington, D.C. in September of 2010.