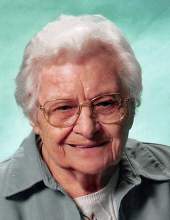 Mass of Christian Burial will be held 10:30 A.M., Wednesday, July 13th at St. Wenceslaus Catholic Church in Duncan with Fr. Paul Lippstock and Fr. Jim Dubert as concelebrants. Burial will be at St. John’s Catholic Cemetery in Duncan.

Elsie Beatrice Formanek, the daughter of Frank and Elizabeth (Hejlik) Schoun, was born February 22, 1914 on a farm south of Duncan. She was married to George Formanek on November 14, 1933 at St. Wenceslaus Catholic Church in Duncan. They made their home on a farm south of Duncan where they raised their four children. George passed away in 1960 at the age of 48. After his death, Elsie moved to Duncan. Elsie was a great cook and baker. She worked in the kitchen at Prairie View Apartments in Garner for a number of years and spent many hours baking in her own kitchen, often filling orders for kolaches, rosettes and filled doughnuts. She spent her retirement years at Prairie View Apartments and the last few years at Westview Care Center in Britt. During her lifetime she never lived more than five miles from her childhood home.

She was a member of St. Wenceslaus Catholic Church in Duncan and Rosary Society.

She was preceded in death by her parents; husband, George; son, Robert and his wife, Alvera; son, Arnold, who died at birth; son-in-law, William Chizek; great granddaughter, Ashlee Chizek; great grandson, Matthew Chizek; sisters, Rose Formanek and Maxine Panosh; and many brothers-in-law and sisters-in-law.
To order memorial trees or send flowers to the family in memory of Elsie B. Formanek, please visit our flower store.