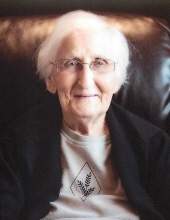 Memorial services will be held 10:30 A.M., Tuesday, May 31, 2016 at the United Methodist Church in Forest City with the Rev. Charles Layton officiating.

Burial of cremains will be at Madison Township Cemetery in Forest City.

A gathering of friends and family will be held 1 hour prior to the services at the church on Tuesday.

Memorials may be directed to the Hospice of North Iowa and the Forest City United Methodist Church.

Emma Lee Nielsen was born March 9, 1921 in Humeston, Iowa the daughter of Earl and Della Bass, they lived in Thornton, Iowa where she graduated from high school in 1940. She was married to Martin A. Nielsen on December 14, 1940 at the Danish Lutheran Church in Sioux City, Iowa. The couple lived in Thornton for a short time before moving to Arizona. They returned to Forest City in 1957, where she operated the Forest City Country Club, then worked at the Coast to Coast Store. She moved to Mission, Texas in 1980, then moved back to Forest City in 2013 where she resided it Forest Plaza until her final months where she resided with her daughter, Mary Swanson.

She was preceded in death by her parents; husband, Martin and son, Jim Nielsen and two brother and two sisters.
To order memorial trees or send flowers to the family in memory of Emma Lee Nielsen, please visit our flower store.