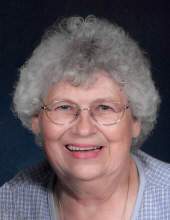 Funeral services will be held 10:30 A.M., Tuesday, June 26th at Faith Lutheran Church in Miller. Cremation will follow the service with burial at a later date in Lakeside Cemetery, Herman, Minnesota.

Visitation will be held from 5 to 7 P.M., Monday at the Cataldo Funeral Chapel, 160 E. 4th St., in Garner with a VFW Auxiliary service at 5 P.M. Visitation will resume one hour prior to services at the church.

Ethel Irene Sperr, the daughter of Arthur and Adella (Piper) Ritter, was born June 21, 1937 at Venturia, ND. She attended school at Enderlin, North Dakota where she graduated from high school in 1955. Ethel continued her education at Wahpeton School of Science in North Dakota graduating with a degree in nursing. On October 12, 1958, she was married to James H. Sperr. They lived in seven communities in Minnesota including Evansville, Springfield, Owatonna, Hibbing, Wilmar, Darwin and Grove City before moving to Shell Rock, Iowa in 1972. Ethel worked as a nurse for over forty years with 26 years of the years at Sartori Hospital in Cedar Falls and the remaining years before her retirement at nursing homes near Waverly. In 2009, she and Jim moved to Garner to be closer to family. She enjoyed canning, gardening, embroidering, cooking, baking and was an awesome pickle maker.

She was a member of Faith Lutheran Church, Garner Lions Club and the Garner VFW Auxiliary.

She was preceded in death by her parents; and two brothers-in-law, Gilman Johnson and Dale Brockman.
To order memorial trees or send flowers to the family in memory of Ethel I. Sperr, please visit our flower store.