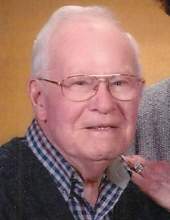 Visitation will begin at 9:30 A.M. till the time of the services at the church on Friday.

In lieu of flowers, memorials may be directed to Immanuel Lutheran Church or Hospice of North Iowa.

Eugene Paul Sauer was born August 12, 1930 in Wells, Minnesota, the son of Reginald G. and Louise (Gerlitz) Sauer. He attended and graduated from New Richland High School in 1948. While in high school he worked at his parent’s gas station. Gene then attended Capital University in Columbus, OH graduating in 1952 with a degree in Business Administration with an emphasis on Accounting.

He was united in marriage to Wilma Wittrock on October 9, 1954 at St. Peter’s Lutheran Church in Lakefield, MN; to this union one daughter, Nancy was born. Gene worked for a short time for St. Paul Hydraulic Hoist and then he and Wilma moved to Thompson, Iowa where he started work as the accountant for REC. He also served as the office manager at the REC for several years and retired as the general manager after 41 years of service in October of 1995. After retirement he enjoyed providing transportation for people to their appointments.

Gene liked to travel; he had many great memories when the family visited many cities in Europe and meeting Wilma's ancestors in Germany. A big highlight for Gene in September 2018 was attending his 70th class reunion in New Richland. Gene loved his cocker spaniel dogs through the years, especially Skip and his childhood dog, Pepper. Gene was a wonderful loving husband, father and will be missed by all who knew and loved him.

In December 2014, Gene moved to the Timely Mission Nursing Home in Buffalo Center, IA. He enjoyed all the social activities at Timely Mission and made many friends with the staff and residents there.

He was preceded in death by his parents; his wife’s parents; brothers-in-law, Fred, Roy, Willis, Don; sisters-in-law, Anne and Hazel and nephew, Brian.
To order memorial trees or send flowers to the family in memory of Eugene P. Sauer, please visit our flower store.