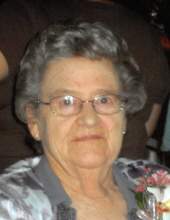 Eunice A. Schoenwetter, 94, of Garner, passed away Wednesday, September 18, 2019 at the Good Samaritan Society in Forest City.

Funeral services will be held 10:30 A.M., Saturday, September 21, 2019 at the United Methodist Church in Garner with Rev. Michael Shaffer officiating. Burial will be at Concord Township Cemetery.

Visitation will be held from 5 to 7 P.M., Friday at the Cataldo Funeral Chapel, 160 E. Fourth St., in Garner and will continue one hour prior to services at the church.

Memorials are preferred to Hospice of North Iowa or the Good Samaritan Society in Forest City.

Eunice Adel Schoenwetter, the daughter of Otto and Amelia (Katter) Schroer, was born September 30, 1924 in Garner. She was baptized and confirmed at Peace Reformed Church south of Garner. Eunice attended and graduated from Hayfield High School in 1941 where she was Hayfield Band Queen her junior and senior year. After high school, she worked as a telephone operator in Garner. On February 14, 1945, she was married to Merle Schoenwetter at Peace Reformed Church. They lived on a farm west of Klemme until 1982 when they moved into Garner. She enjoyed spending time with her family, baking, crocheting and making homemade noodles.

She was a member of the Garner United Methodist Church and United Methodist Women. Before moving to Garner, she belonged to Immanuel Reformed United Church of Christ in Klemme where she taught Sunday school and bible school. She also was a 4-H leader when her children were growing up.

She was preceded in death by her parents; husband, Merle, Apr. 21, 2006; son-in-law, Walter Bradford; brother, Orville Schroer; and two sisters, Julia Gable and Leona Niswander.
To order memorial trees or send flowers to the family in memory of Eunice A. Schoenwetter, please visit our flower store.