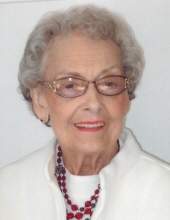 Eva Keel Amelsberg Olson, age 89, died peacefully in her sleep on January 8, 2016, at the Good Samaritan Center, and is now rejoicing in heaven in the presence of her Lord and Savior. She lived in her home at Central Plaza in Forest City until a week prior to her death.

Eva was born in rural Hancock County on February 9, 1926, to Clarence and Winnifred (Nonnweiler) Keel. She grew up with her brother Bob Keel on a farm west of Forest City that was homesteaded by her great-grandparents and is still in operation today as a Century Farm. She attended country school through eighth grade and graduated from Forest City High School in 1943. After graduation, she worked at the telephone office in Forest City. On September 3, 1947, she married John Amelsberg and they moved to John’s family farm near Thompson, Iowa, until moving to their farm in Forest City in 1954. John and Eva’s twins, Jim and Julie, were born and raised on this farm, and Eva continued to work with John on the farm until John’s death in October of 1977. She always said that she lived ‘her dream career’ of being a mother and farm wife. She was a dedicated supporter of 4-H as a club leader and local fair judge, and won several local and state awards for her involvement in the 4-H program. She loved working in her large garden and raising chickens, and was an accomplished seamstress, who outfitted family and friends in clothes that she designed and created.

On February 17, 1979, Eva married Donald J. Olson. They lived in Forest City and Florida until Donald’s death in March, 2007. Eva always felt blessed by the Lord to have an additional family of children, grand-children and great-grandchildren. She shamelessly bragged about her grandchildren and ‘another great-grandchild’ being born into her two families and made personally-designed birthday and special occasion cards on her computer for each and every one of them up until the week before she died.

Eva was a personable conversationalist and enjoyed socializing with friends and family. Even though she became homebound, she had a steady stream of visitors of all ages. She was involved in many social activities and community volunteer groups throughout her life. Eva was especially dedicated to her faith family at First Baptist Church in Forest City, where she and John served in many roles, including beloved youth group leaders. Eva supported causes and justice ministries that were important to her, especially for women and children through World Vision and Hope4Kids International. Her God-given tenacity, courage, and optimism allowed her to live well beyond medical expectations and predictions and she was grateful for her special friends and helpers at Hospice. She loved to laugh and have fun, and will be fondly remembered by her family as a fierce competitor at cards and family games, and for engaging, lively discussions and story-telling at family gatherings. She kept in touch with family and friends through social media. When homebound, she spent many hours on her computer and i-pad, staying informed about current events and world news, listening to Pastor Eric’s podcast sermons, and keeping up on First Baptist news and on the lives of her family and friends. Eva loved Jesus and was ready for ‘her new adventure’ of seeing Him face to face.