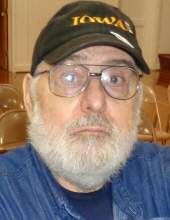 FOREST CITY - Franklin Dean Larson, 71, of Forest City passed away Sunday, January 10, 2016 at Saint Marys Hospital in Rochester, MN after having a silent heart attack due to the effects of his long time struggle with diabetes.

Visitation will be held from 4:00-7:00 P.M. Wednesday, January 13, 2016 at Cataldo Schott Funeral Chapel, 505 North Clark St, Forest City, Iowa. Inurnment of his cremains will be held at a later date.

The family requests that in lieu of flowers memorials may be directed to the Frank Larson memorial fund in care of the family. The family also request that casual attire or favorite sports team be worn services.

Franklin and his twin sister were born November 7 and 8, 1944 in Forest City, IA to I. Elias and Anna (Werstein) Larson. Franklin was the younger of the twins. Frank was baptized and confirmed in the Lutheran Church. He attended the Forest City Schools until 1964.
During his lifetime, Frank did construction for Petersen Construction, welded for Forester and Winnebago Industries, served as the town cop in Kanawha, was the janitor at the Forest City Community Schools, and retired from Winnebago Industries as an assembly worker.
Franklin married Marcia L. Tripp on February 15, 1969 at the Methodist Church in Kanawha, IA. Frank and Marcia had four daughters and in 1994 assumed guardianship of a young lady with cerebral palsy.

The great legacy that Frank leaves behind is one of love and commitment. Frank loved his wife and daughters greatly, he shared a deep bond with his twin sister, and he loved all of his extended family. Frank was always willing to give of himself to help any member of his family. In recent years, his greatest joy has been spending time with his grandchildren.
Frank enjoyed both Iowa Hawkeye and Iowa Cyclone football and basketball. The only time he rooted against ISU is when they play Iowa. Frank cheered for the Vikings, even in the tough times. He enjoyed joking around, singing silly songs, fishing, building things, working on cars, westerns, and war movies, especially John Wayne. Frank truly enjoyed the years he spent working on the race cars with ‘the boys’ at the Britt race track.

Franklin was preceded in death by his father and mother, Elias and Anna Larson, his in-laws, Stanley and Myrna Tripp, his brothers, Louis, Leonard, Elmer, and Elvin, his sister, Lois, his sister-in-law, Joyce, his nieces, Ann and Loree, his nephew, Jon, and his daughter, Amy.
Frank is survived by his wife, Marcia, his daughters, Myrna, Deana, Ursula, and Kendra, his grandchildren, Hailey, Joshua, Konnor and Khloee, his twin sister and husband, Eleaner and Gary Sheldahl, his sisters-in-law, Judi Larson, Sandy Larson, Sandy Christensen, and Sheila Marzen, his brothers-in-law and wives, Vance and Gloria Tripp, Dennis and Micki Tripp, and Dean Tripp, along with many greatly loved cousins, nieces, nephews and friends.
To order memorial trees or send flowers to the family in memory of Franklin "Frank" Larson, please visit our flower store.