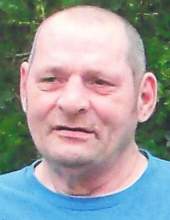 George A. Harms, 70, of Clear Lake, formerly of Garner, passed away Saturday, May 7, 2022, at MercyOne North Iowa Hospice Unit in Mason City.

A private family graveside service will be held at a later date in Concord Township Cemetery in Garner.

George Allen Harms, the son of Reno and Ione (Tanner) Harms, was born August 26, 1951, in Forest City. He grew up in Garner and attended school in Hayfield for special education. He later lived in Woodward, Boone, New Hampton and most recently One Vision in Clear Lake. George loved to fish, bowl, spend time with family and watch TV, movies, wildlife and family pets.

George is survived by his three brothers, Ernest Harms of Garner, Howard (Sharon) Harms of Clear Lake and Harley Harms of Garner; a sister, June Harms of Albert Lea, MN; sister-in-law, Janine Harms of Hill Point, WI; an uncle, Walter Tanner of Mason City; and many nieces and nephews.

He was preceded in death by his parents; brother, Duane and August Harms; sisters, Grace Monson and Frances Benesh; and sister-in-law, Julie Harms.

To order memorial trees or send flowers to the family in memory of George A. Harms, please visit our flower store.