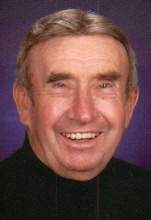 Funeral services will be held 10:30 A.M., Saturday, May 31st at St. Wenceslaus Catholic Church in Duncan with Fr. Dennis Miller and Msgr. John Hemann as celebrants. Burial will be in St. John's Catholic Cemetery.

Visitation will be held from 4 to 7 P.M., Friday at the Cataldo Funeral Chapel in Garner with a Catholic Workman rosary at 4 P.M. and a Scriptural wake service at 7 P.M. Visitation will continue one hour prior to services at the church.

George John Tusha, the son of John and Anna (Tlach) Tusha was born November 17, 1935 on the family farm west of Garner. George attended Garfield No. 8 country school until the eighth grade and graduated from Garner High School in 1953. He farmed with his father west of Garner until serving in the U.S. Army from 1959 to 1961. On November 22, 1961 he married Darlene Dornbier at St. Joseph Catholic Church in Wesley and to this union three sons were born, Tim, Tom and Ted. The couple lived and farmed on the family farm for many years. Darlene died on September 15, 1990. George was also a seed dealer for O's Gold and Asgrow and a crop adjuster for Farm Bureau from 1982 to 2010. On July 2, 1993 he married Mary Lou Formanek at St. Wenceslaus Catholic Church in Duncan. They made their home in Garner. He enjoyed spending part of winter in Arizona, playing cards, especially with his daily card group at Mat's Place, and spending time on the farm. George also liked to watch his grandchildren's ball games, Iowa State games and watching the birds in the back yard. His faith was very important to him and he carried a rosary in his pocket daily.

He was a lifetime member of St. Wenceslaus Catholic Church, Catholic Workman FCSLA Branch 51 where he held various office positions and served on the cemetery board from 1991 to 2013.

He was preceded in death by his first wife, Darlene; his parents, John and Anna Tusha; daughter-in-law, Cathlyn Tusha; grandson, Jonathon Tusha; and sisters, Agnes (Ray) Steven and Marie Tusha.

To order memorial trees or send flowers to the family in memory of George J. Tusha, please visit our flower store.