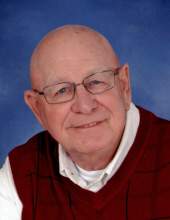 Memorials may be directed to the Forest City Ambulance Service.

Gerald Duane Thompson, the son of Robert Gerald and Rose Sarah (Huff) Thompson, was born March 10, 1939 in Missouri Valley, Iowa. Jerry was married to Alice Gardner and to this union three children were born, Duane, Brian and Paula. He was employed as a law enforcement officer for the Iowa DOT until his retirement in 2001. On December 3, 1988 he married Shirley Brown Hanna. They made their home in Forest City. In his retirement, he enjoyed traveling, golfing and was an avid stock car racing fan.

He was a member of St. Paul Lutheran Church where he served as an usher. He belonged to the Over 50 Club at the Gruis Recreation Area/The Barn south of Buffalo Center.

He was preceded in death by his parents; two wives, Alice and Shirley; and his three children, Duane, Brian and Paula.
To order memorial trees or send flowers to the family in memory of Gerald "Jerry" D. Thompson, please visit our flower store.