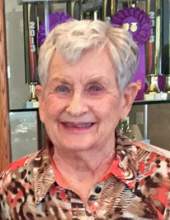 Visitation will be held from 5 to 7 P.M., Thursday at the Cataldo Funeral Chapel in Woden and will resume one hour prior to services at the church.

Gerdis Cleone Haugen, the daughter of Ole and Elizabeth (Gjertson) Haugen, was born August 3, 1930, on a farm north of Woden. She was baptized and confirmed at Grant Lutheran Church. Gerdis attended rural school until March of 1944 when the family moved into Woden. She graduated from Woden High School in May of 1948. Gerdis took college credits at Luther College in Decorah and taught in rural schools near Woden for four years. She then worked for Eastern Airlines in Chicago and Scandinavian Airlines in Minneapolis as a reservationist. Gerdis attended Mankato State College in Mankato graduating in December of 1965. She taught first grade in Clear Lake for a semester and then for the next sixteen years was the high school librarian. After ending her years in the school setting, she moved back to Woden to stay with her mother and brother, Buddy. Gerdis enjoyed traveling to New York, Washington, D.C., Miami, Panama Canal, Peru, Hawaii, California and Colorado while working for the airlines. With her mother, she took many road trips to Minnesota, Colorado, Missouri and Texas to visit relatives. They made many trips to Loveland, Colorado to visit Alice and family, Missouri to visit Colleen and family and Missouri and Texas to visit Diana and family. After Buddy passed away in August of 2012, she stayed at the home place in Woden where Haugens had lived since March of 1944. She moved to an apartment in Garner on July 24, 2014. The place in Woden sold in May of 2015 after being in the family for 71 years. Gerdis had visited Norway in 2012. Gerdis enjoyed cooking and baking. She always made our family favorites, such as caramel bars, buns, cinnamon rolls, cookies, and glorified rice for holidays and special occasions.

She was a member of St. John’s Lutheran Church in Woden. Gerdis also enjoyed luncheons with her birthday club.

She was preceded in death by her parents; sister, Bernice in 1935; brother, Elliott in 1948, brother, Harold “Buddy” in 2012; and sister-in-law, Gloria Haugen in 1989.
To send flowers to the family in memory of Gerdis C. Haugen, please visit our flower store.