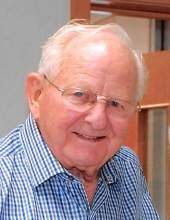 In lieu of flowers, memorials are preferred to Hancock County Memorial Hospital.

Harlan Hilton Haberkamp, the son of Verner and F. Marie (Burke) Haberkamp, was born November 7, 1930 in Mason City. He grew up on the family farm southwest of Garner and attended country school until the eighth grade. Harlan graduated from Garner High School in 1950 and began farming with his father. On December 28, 1951 he married Virginia Quintus at the United Presbyterian Church in Garner. They lived in Garner for a brief time before moving to the family farm where they raised their family and Harlan continued to farm. After retiring from farming, he worked at IMT in Garner and drove bus for Opportunity Village now One Vision in Clear Lake. Harlan and Virginia wintered in Texas for many years. He enjoyed his family, camping, tinkering and attending the Iowa State Fair.

He was a member of the United Presbyterian Church and served on the Farmer’s Cooperative Society board in Garner and the Production Credit Association board.

He was preceded in death by his parents; two great- grandsons; two sisters, Susan Myers and Nancy Jass; and brothers, Eugene and Burke Haberkamp.
To order memorial trees or send flowers to the family in memory of Harlan H. Haberkamp, please visit our flower store.