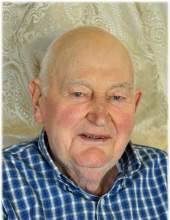 The Church of Jesus Christ of Latter-day Saints

Funeral services will be held at 10:00 A.M., Monday, February 1st at The Church of Jesus Christ of Latter-day Saints in Mason City with Bishop Kelly Hansen officiating. Burial will be at Concord Township Cemetery in Garner with military rites conducted by the Garner Veterans Ceremonial Unit.

Visitation will be held from 3 to 6 P.M., Sunday at the Cataldo Funeral Chapel, 160 E. 4th St., in Garner and will resume one hour prior to services at the church.

Memorials may be directed to the Garner Volunteer Ambulance Service.

Harry Robert Abele, the son of John Lewis Abele, Jr. and Esther Mae (Schuldt) Abele, was born September 3, 1930 on the family farm in Liberty Township, Hancock County. He attended country school in Liberty Township and graduated from Garner High School in 1948. Harry enlisted in the U.S Army in 1951 serving his country as a Sergeant during the Korean Conflict. On October 3, 1953 he married A. Colleen Stokes in Ogden, UT. Following his honorable discharge in 1954, the couple moved to the family farm west of Klemme where they raised their five children. Harry farmed until his retirement in 2006. In November of 2011, he moved to Prairie View Apartments in Garner. He enjoyed his family, farming, fishing and flower gardening.

Harry was a member of The Church of Jesus Christ of Latter-day Saints in Mason City where he served as bishop and was active in many other church responsibilities. He also was a past member of the Klemme Lions Club.

He was preceded in death by his parents; wife, A. Colleen, May 31, 2008; an infant son; son-in-law, John O’Hara; two sisters, Ruth Pringnitz and Madeline Abele; and a brother, Harold Abele.
To order memorial trees or send flowers to the family in memory of Harry R. Abele, please visit our flower store.

The Church of Jesus Christ of Latter-day Saints