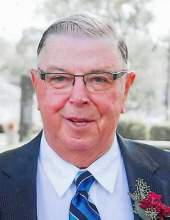 Mass of Christian Burial will be held 10:30 A.M., Wednesday, April 7, 2021 at St. Wenceslaus Catholic Church in Duncan with Rev. Fr. Andrew Marr officiating. The service will be livestreamed on the Cataldo Funeral Home Facebook page. Burial will be at St. John’s Catholic Cemetery.

Visitation will be held from 4:00 to 7:00 P.M., Tuesday, April 6th at St. Wenceslaus Catholic Church with a Scriptural wake service at 3:30 P.M. followed by a Catholic Workman rosary.

Memorials may be directed to St. Wenceslaus Catholic Church or the Iowa Donor Network.

Henry Vincent Rayhons, the son of Henry and Agnes (Kopacek) Rayhons, was born May 8, 1936 on the family farm in Garfield Township, Hancock County. He attended Garfield No. 5 country school and graduated from Garner High School in 1954. On April 28, 1959 he married Marvalyn Carolus at St. Wenceslaus Catholic Church in Duncan. He lived with his parents for a brief time before marrying and moved to an acreage a mile east of Hayfield where they farmed and raised their four children. Besides farming, Henry also served in the Iowa State House of Representatives for 18 years. After Marvalyn passed away he remained on the farm. On December 15, 2007 he married Donna Young at St. Boniface Catholic Church in Garner. They lived in Hayfield for a few years before moving into Garner. He enjoyed farming, watching his grandchildren play sports, listening to polka music, mowing grass, and riding his four-wheeler.

He was a lifetime member of St. Wenceslaus Catholic Church where he served as a eucharistic minister, usher, lector, and sang in the choir. Henry also was a member of the Catholic Workman and served on several boards including the Iowa Donor Network, Iowa Farm Bureau, and Soil and Water Commissioner boards. He was proud to have donated over 31 gallons of blood over his lifetime.

He was preceded in death by his parents; in-laws Richard and Anna Carolus, wives, Marvalyn and Donna; brother, Francis Rayhons; sister-in-law, Carole Rayhons; and brothers-in-law, Paul Grandgenett and Denny Jontz.
To order memorial trees or send flowers to the family in memory of Henry V. Rayhons, please visit our flower store.