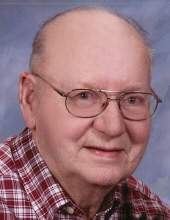 Howard D. Johnson, 85, formerly of Forest City, died peacefully last Saturday night with family by his side. He was living in a care center in Mt. Vernon, Iowa, having moved to the Cedar Rapids area after his beloved Marge passed away in 2009. Howard had suffered from Alzheimer’s disease for over a decade.

The family intends to direct monetary memorials to Alzheimer’s research. In lieu of flowers, please consider making a donation in Howard’s honor to the Alzheimer’s Association, P.O. Box 96011, Washington, DC 20090-6011, or online at www.alz.org.

Howard was born on August 23, 1930 in Kanawha, Iowa, the son of Tommy O. and Louise (Johnson) Johnson and the third youngest of ten living siblings. His family moved to a farm west of Forest City when he was 14, and Howard graduated from Forest City High School. He was drafted into the United States Army during the Korean conflict, and served two tours of duty in Europe before being honorably discharged. Upon his return, Howard lived and worked on the family farm. In his free time, Howard enjoyed singing, playing guitar and harmonica, and was part of a country western band called “the Leland Ramblers.”

Howard married Marjorie D. Austin on August 26, 1961, and became the loving adoptive father of Marge’s two daughters, Penny and Deb, and later, the father of two more daughters, Shelly and Trudy. Howard and Marge lived and worked on the family farm until 1979, when they moved to Leland. Howard then worked for the Farmers’ Co-op Elevator in Forest City until he retired.
Howard cherished time spent with family, and enjoyed traveling to visit relatives around the country. He also enjoyed golfing in his later years. Howard was a member of the American Legion and Immanuel Lutheran Church. He was a kind and gentle man, and he will be missed by all who knew and loved him.