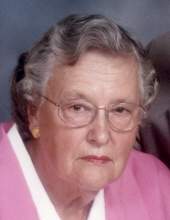 Funeral services will be held 10:30 A.M., Tuesday, October 1, 2019 at the United Methodist Church in Garner with Rev. Michael Schaffer officiating. Burial will be at Concord Township Cemetery in Garner.

Visitation will be held one hour prior to services at the church on Tuesday.

Memorials may be directed to Gateway Hospice.

Ivadell Ruth Schoenwetter, the daughter of Jacob and Fannie (Heginger) Blumer, was born February 7, 1927 on a farm in Liberty Township, Hancock County. She attended country schools in Ell Township and later Concord Township until the eighth grade. Ivadell then helped her father with farming while her brothers were in the service after which she was employed at different places in Garner. Her last job was with Drs. Held and Johnson, veterinarians. On November 16, 1969 she was united in marriage to Ray Schoenwetter at the United Methodist Church in Garner. They farmed together near Klemme until retiring and moving into Garner in the fall of 2011. She enjoyed gardening, canning, flowers, quilting, taking trips and baking.

Ivadell is survived by her sister, Betty Halverson, of Garner; brothers, Harold Blumer of Garner and Donald Blumer of Cassville, WI; sister-in-law, Ethel Schoenwetter of Klemme; and many nieces and nephews.