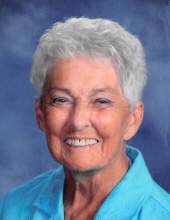 A memorial service will be held 10:30 A.M., Friday, April 12, 2019 at St. Boniface Catholic Church in Garner with Rev. Jim Dubert officiating. Burial will be at a later date in Rose Hill Cemetery, Greene, Iowa.

Mary Joanne Neal, the daughter of Joseph and Mary (Nettleton) Steinberg, was born May 21, 1932 in Garner. She graduated from Garner High School in 1950 as class valedictorian and continued her education at UNI in Cedar Falls. She worked for Waterloo Courier after college. In July of 1952, she was married to Marcus (Beeler) Majewski. To this union three children were born, Marc, Jan and Greg. They lived in Greene where Jo worked as school secretary. In 1966, her husband, Marcus, passed away. In 1968, she married Robert J. Neal. They lived in Marble Rock where they owned and operated Jay Distributing Company. Jo served on the Marble Rock City Council from 1971 to 1981. In 1978, she learned to fly an airplane and became a commercial pilot with ratings as a commercial pilot with Flight Instructor, Instrument Flight Instructor and Ground Instructor. She also had her single engine and multi-engine certificates. Jo worked at Charles City Aeronautics as a Flight Instructor and Charter Pilot. In 1981, her husband, Bob, passed away. Jo continued to live in Marble Rock until the death of her youngest son, Greg. She then went to work for the FAA from 1984 until 2001 in a variety of positions including Air Traffic Control, Flight Safety Specialist and Accident Prevention Counselor. She enjoyed the challenge of the high-pressure jobs and the opportunity to travel and work in Indiana, Ohio, Texas and Oklahoma. She retired in Oklahoma in 2001. In 2010, she moved to Garner where she was active in the Garner Rotary Club and a member of St. Boniface Catholic Church.

Jo was involved in Community Betterment in Marble Rock and served as a community betterment judge for five years. She was a member of the International Organization of Women Pilots (the 99’s), Experimental Aircraft Association, Aircraft Owners and Pilot Association, PWC (professional women controllers), Marble Rock Historical Society, Catholic Daughters of America and the Flying Tigers Association.

She was preceded in death by her parents; two husbands; son, Greg in 1983; brother, Jack Steinberg; and sister, Pat Bourk.
To order memorial trees or send flowers to the family in memory of Jo Neal, please visit our flower store.