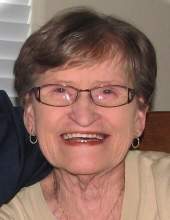 Funeral services will be held 10:30 A.M., Saturday, October 3, 2015 at St. James Catholic Church in Forest City. Burial will be in the church cemetery.

Memorials may be directed to the Karen Ann Geddes memorial fund in care of the family.

Karen Ann Geddes, the daughter of LeRoy and Helena (Austin) Zuehl was born August 2, 1938 in Britt, IA. She graduated from Britt High School in 1956. On Feb 1st, 1958 she married Dean Geddes at Holy Family Catholic Church in Mason City, IA. They lived in Florida, Alaska, Iowa, Arizona, and Nevada.

She loved cooking, baking and spending time with her family and grandchildren. She enjoyed her job working as a beautician for 35 years. She loved playing cards, knitting, crocheting, and watching her favorite soaps. She was a member of St. Thomas More Catholic Church in Las Vegas, NV.