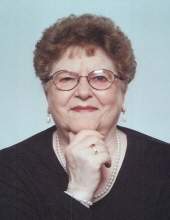 Burial will be held in Madison Township Cemetery in Forest City.

Leona Mae Ruiter was born on July 6, 1926 in Merservey, Iowa the daughter of Fred and Tina (Gruis) Ruiter. She attended school in Meservey and she was married to Hubert Dale Orvick on January 28, 1947 in Des Moines, Iowa.

Mom’s first and foremost love was being a Mom and a wonderful wife to Dad. When Mom and Dad got married in 1947, they lived in various places in Clear Lake. In May of 1950 they moved to the Anges Jacobs farm south of Forest City where they farmed from March of 1950 to August of 1976. In December of 1976, they decided to move into Forest City and lived at 345 South 8th Street.

Leona took a job at Winnebago Lampshade Factory. This was totally different to Mom. She loved her life on the farm and working in a factory was new territory. She didn’t realize when the bell rang that she was supposed to take a break. She just kept working. A few months later, she moved on to work at the Forest City High School cafeteria from 1976 to 1985. This was a great move for her. During this time, Mom decided to get her GED. Education was important to her and she would come home from work and study so hard. We were all so proud and happy for her at her graduation. She was a wonderful homemaker and she had found her niche working in the cafeteria. She made so many friends there and then decided to move on. Her last employment was with Waldorf College working in the kitchen from 1985 until her retirement in the spring of 2000. During that time, she made so many friends with the students and especially exchange students. She loved the catering jobs that Waldorf did as it gave her the opportunity to decorate which she was very good at.

At her surprise retirement party, she almost missed the party they had planned for her on the Lady of the Lake at Clear Lake. The paddle boat had already set sail, but Dad and Mom stopped a young man and asked if he could get Mom out to the Lady of the Lake on his Ski Doo, and Mom, scared to death of water, jumped on the back, held on tight, and this young man got her to the paddle boat and they got her on board. That in itself says something about our Mom. Never afraid. Mom was our watchtower. Always watching out for her family.

Leona is survived by her daughters, Sheilah Luttring of Faribault, MN; Carmen Hauge of Forest City; grandsons, Chad Green of Faribault, MN, and Bryan (Shelby) Hauge and their daughter, Kendall, of Medford, MN. Other survivors include her brother, LuVern (Dorthy) Ruiter of Thorton and sister, Maurine Nash of The Villages, FL.

She was preceded in death by her husband, Hubert; son-in-laws, Duane Luttring and Kent Hauge; granddaughter, Lauri Green, sisters, Viola Kessler, Diane Ruiter and brother, Dale Ruiter; her parents, Fred and Tina Ruiter and her-in-laws, George and Mable Orvick.
To order memorial trees or send flowers to the family in memory of Leona Mae Orvick, please visit our flower store.