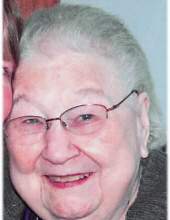 Memorial services will be held 11 A.M., Saturday, December 26th at Peace Reformed Church south of Garner with Cody Schwichtenberg officiating. Private inurnment will be in Concord Township Cemetery in Garner.

Visitation will be held one hour prior to services at the church on Saturday. Cataldo Funeral Home is in charge of arrangements.

Lillian Mae Brass, the daughter of Albert and Anna (Trasamar) Krosch, was born April 18, 1921 at Stevens, Iowa in Kossuth County. She attended the rural schools in Kossuth County until the eighth grade. On December 9, 1945 she was married to William Brass at the Lutheran Church in Stevens. They farmed northwest of Buffalo Center for many years before moving to Garner. Lillian worked outside the home for a few years and then started a day care in her home in 1978. After William passed away in 1989, she remained in Garner until moving to Timely Mission Nursing Home in Buffalo Center in August of 2015. Her passions in life included baking, canning, sewing and reading, but above all, was her family. Every child was greeted with a smile and a “Hello, sweetie pie,” hence her nickname, “Sweetie Pie Grandma.” She was an unmaterialistic, selfless woman with a beautiful soul who will be greatly missed.

She was a member of Peace Reformed Church.

She was preceded in death by her parents; husband, William, May 30, 1989; a daughter-in-law, Martha (Friedow) Brass; and two brothers, Wilbur and Virgil Krosch.
To order memorial trees or send flowers to the family in memory of Lillian M. Brass, please visit our flower store.