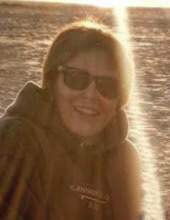 Lori A. Hanna, 61, of Suquamish, Washington, formerly of Woden, died Thursday, March 22, 2018 at Harrison Medical Center in Bremerton, Washington after a valiant battle with cancer. It is with great sadness that we said goodbye.

Memorial services will be held 11 A.M., Saturday, April 7th at St. John’s Lutheran Church in Woden with Rev. S. Kim Peterson officiating. Inurnment will be at a later date in Grant Township Cemetery near Woden.

Visitation will be held from 9:30 A.M. until service time Saturday, April 7th at the church. Cataldo Funeral Home of Woden is in charge of arrangements.

Lori was born January 18, 1957 in Britt, Iowa to Bruce and Doryce Hanna. She graduated from Woden - Crystal Lake High School in 1975. She was member of St. John's Lutheran Church in Woden, Iowa. After getting her degree as a medical technician she worked in Ames, Iowa but felt the tug of the ocean and ventured off to Hawaii to live for several years. She loved being outside and only needed two things in life - the ocean and the mountains. She was caring and compassionate and extremely fun to be around, which is evident in the fact that she had wonderful adoptive families wherever she went. In Hawaii, her family included the doctor she worked for, a very special co-worker whom she named Tu (short for grandma in Hawaiian) and Tu's husband and daughters. Tu was like a second mom to Lori. Lori loved them all dearly and they loved her back. She continued to be close to them for the rest of her life. She ventured back to the mainland for the next leg of her journey. For the next few years she went back and forth between Hawaii and the mainland in search of her perfect place. In 2000, she finally found her ocean and mountains again in Washington. She worked as the office manager at Island Family Eyecare in Bainbridge Island. No surprise, she adopted another wonderful family at her workplace. Her family there included a dear lady, Walli, who became her third mom, Walli's husband, the doctors she worked for and many special co-workers. Lori was loved by them all along with the patients she worked with - she touched so many people. She was a very dedicated worker and a very dedicated friend - once a friend, always a friend. Several years ago she was lucky enough to have found "her place" in Cannon Beach, Oregon where she spent long weekends and and many wonderful sister trips. She was blessed to have had a few trips that included her mom - memories that we will always treasure.

She will be remembered forever by her sisters, Tammy (Scott) Johnson of Britt and Lisa (Doug) Swingen of Woden; niece and nephews, Megan (Corben) Schueler, Matthew Swingen and fiance', Meaghan Schmidt, Ryan (Katie) Johnson and Justin (Mary) Johnson; five and one-on-the-way great nieces and nephews. She will also be greatly missed and fondly remembered by several aunts, uncles, cousins and friends.

She was preceded in death by her parents and an infant sister, Tresa. A hui hou kakou - until we meet again.
To order memorial trees or send flowers to the family in memory of Lori A. Hanna, please visit our flower store.